Lycanthropic Chants is proud to present the “Septic September 2022” shows of CRYPTIC BROOD and FILTHDIGGER:

CRYPTIC BROOD will have a new 7“ release available in a special version that will be only available at those shows! More news about this very, very soon! 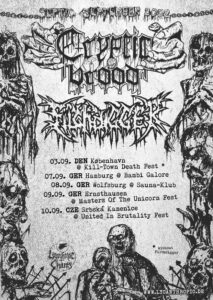 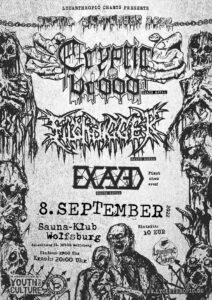 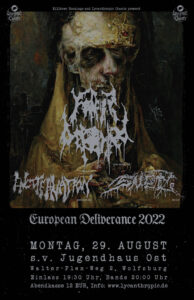 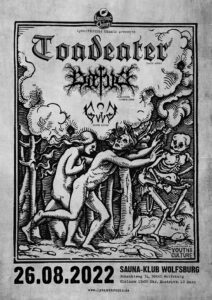 Available from our shop! 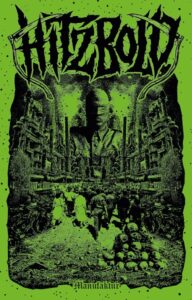 HITZBOLD is a young and passionate band from Osnabrück/Germany. Their way of blending different kinds of genres from punk to metal and beyond is remarkable. So we’re stoked to support this band and release their “Manufaktur” EP on tape!

Available from our shop. 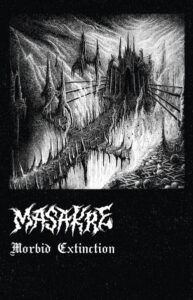 Indonesian Deathcrust upheavals MASAKRE unleashes the group’s latest bombardment “Morbid Extinction”, an EP of paramount and undeniably reeking in bloodthirsty nature
Right from the opener that sounds akin to a straight-up declaration of war, “Morbid Extinction” sounds absolutely immense and gripping; tiptoeing a thin line between Crust Punk and old school Death Metal and yet MASAKRE manages to churn out every riff with a fresh yet deadly perspective.

The first press has sold out quick and we immediatly ordered a repress: 250 copies on oxblood red 12″ vinyl with etching on side B. Packed in black poly-lined bags, 300gsm cover with obi-strip and 150gsm art paper insert plus download code. They are available for pre-ordering now and will be released on 1st July 2022!

Spawning from the global death-surge, “Night Raid” by MINENFELD will definitely leave you a memento mori impression on one of the heaviest slabs of ancient death metal. Delivering death metal in its most skull crushing quality and mid-paced madness that once you have learned from BOLT THROWER, this German war master quartet sounds like a tank rumbling across the corpse landscape. Every time their deadly beats pounding, the guitar onslaught and the drums blazing — it encapsulates the atrocities of battle.

Recorded at the Eastern Bunker, their attack in a mere 14 minutes is free floating chaos like an everflowing stream under the command of Henner Rekorder as the sound engineer and mastered by Role at Tonmeisterei which assists the band in finally churning out its distinctive signature sound. And the cover art contributed by Jan Buragay profoundly channeled MINENFELD’s energy to explore their darkest fantasy in a combat zone of unending cruelty and savage barbarism. May the war on nationalism never end!

Fitting for their name, MINENFELD (German for minefield), if you are ready to listen to a record that was written on bloodied fields and driven by war without end that soaring woefully. This utterly compelling masterpiece is for you: 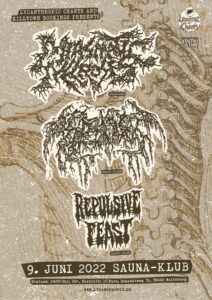 Finally available on #tape for the very first time