A first track from the upcoming EP “Empiricism” by INCARCARATION premiered on CVLT Nation today!

According to this, another special edition and the regular edition of the tape is available for pre-order now.

The tape is available for pre-order from our shop. Release is scheduled to 16th April 2021.

Official t-shirts and longsleeves were also added to the shop. They will be out on the same date as the tapes.

Brazilian/German Death Metal quartet INCARCERATION officially announced their upcoming release “Empiricism”. With 21 minutes long, the record presents four brand new tracks and the two new guitarists Pedro Capaça (VIOLATOR) and Alex Obscured (SPEEDWHORE, OBSCURED BY EVIL). The cover illustration was signed by Rodrigo Salvatierra, and each song has its own illustration by Jenglot Hitam. It is the band’s most creative and ambitious – yet raw – production to date. For this reason it’s recommended only for underground extreme demo-tape worshippers. “Empricism” is scheduled to be released on tape via Lycanthropic Chants on 16th April 2021.

It’s totally clear, many people were waiting for this EP for very long. So before putting up the regular edition of the tape, we’d like to feed the maniacs with a special edition: This version is limited to 33 copies with slipcase, inlay and tape in bone-papyrus colouring. The regular edition will stick to the blood dripping layout of the EP.

The tape is available for pre-order from our shop.

Come and feast at the repulsive fusion of death metal and grindcore. After gaining decent recognition last year with the „Brewing Rancid Stew“ EP, the German gruesome trio returns to the sound of classic and abrasive death/grind riffing from the masters of gore under the name „Meat Hook Mutilation“.

The new material is beyond the epitome of sickness – a total of four tracks, clocking under 10 minutes of grinding death’s breath, that will leave the listeners ear bleeding from disgust.

Each track easily stands out on its own, from „The Dead Walk at Night“ to „Vapour Torture“ that allows the music to be blazingly fast and furious but never becomes dull. Unlike its predecessor, „Meat Hook Mutilation“ drifts into their most violent and primitive works. Release facts:

The record is housed in a black inner sleve and a fold out cover made of 300g thick paper and includes a free digital download code.

Order the 7″ from our shop. 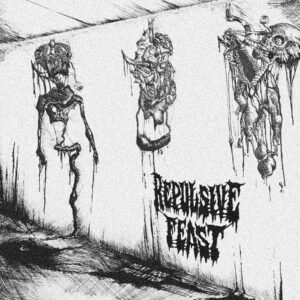 Roman from Transcended Music Blog asked me some questions about my activities with Lycanthropic Chants, CRYPTIC BROOD, REPULSIVE FEAST and underground death metal and DIY in general. Thanks for the nice chat! Read the full interview at this location. 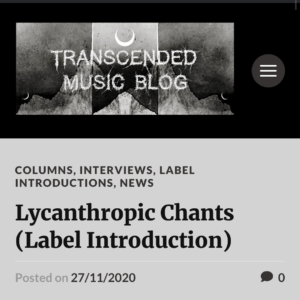 The shop is open again. Shipping will resume. Thanks for your understanding over the past weeks.

New records have been added to the distro:

Hello world, due to health reasons, our shop will remain closed until the end of October 2020.

I had the pleasure of talking to Matt Alexander from The Sleeping Shaman Webzine about my Lycanthropic Chant activities. In addition, an eye was cast on my bands CRYPTIC BROOD and REPULSIVE FEAST. Read the interview on their website:

Another new release that's available from us since

All three versions of new 7" EP from REPULSIVE FEA